The voices of train operators on the DC Metro system are one of my favorite parts of District life. Half of the time you will get a run-of-the-mill conductor, but the other 50% includes apparent guest appearances by Sylvester Stallone, Dustin Hoffman, Keanu Reeves, Jack Nicholson, Jason Statham and many more!

A fellow redditor had the foresight to turn on his video camera recently. This conductor is still one of my favorites.... (wait for it)

DC Metro Blue Line Announcer by gfesteves
Posted by Luke at 12:06 AM No comments: Links to this post

Labels: Around the City, Metro, The District, videos

New budget autonomy for DC in the work, or "Lieberman steps it up" 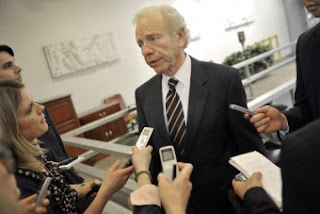 Senator Joe Lieberman (I-Conn) introduced legislation to the Senate last night that would grant the District of Columbia new budgetary autonomy. The initiative would severe the District's budget from the Congressional appropriations process, which currently exposes local administration to federal political infighting and often delays the District budgetary development by six to eight months. Lieberman was joined by Senators Susan Collins (R-Maine) and Dan Akaka (D-Hawaii) as cosponsors. Lieberman’s newest move comes as support continues to build in the House, where Rep. Darrell Issa (R-Calif.), chairman of the D.C.-focused Oversight and Government Reform Committee, has been recently spearheading the reform effort. Lieberman will be retiring at the end of his current term, and this latest bill is seen as part of an effort to button-down his legacy as a District-governance advocate.The Give D.C. Local Budget Control Bill of 2012 would grant DC government the power to set its own fiscal year and develop a budget without interference from the Congress. The legislation does not entirely strip Congress from the equation, however; it will still have a period in which to review the budget and vote on a “statement of disapproval” that would also have to be signed into law by the president. While oversight of the District remains with Congress (as proscribed in the Constitution), this new arrangement would distance Congress from the formative budget process and require members to make and up-or-down vote on the final product.Read the full story at Roll Call.
Posted by Luke at 2:11 PM No comments: Links to this post

In the 9 months since I moved to DC, I have never - not once - managed to catch the connecting REDLINE train towards Glenmont at Metro Station, though I have on rare evenings such as this brushed the sliding doors with my fingertips as they closed on my hopes and slipped away into the darkness once again.

Labels: Around the City, Metro, Quote of the Day

Eastern Market is accepting applications from farmers for its new open-air farmers’ market that will be held on Tuesdays from 3pm – 7pm. The deadline for submitting applications is set for May 1. For those of you who have mentioned wanting to expand your hobbies into an actual small business here in DC (or know people who are thinking about it), this could be a decent opportunity. It sounds like the list is growing, but now overcrowded yet since it's a new market schedule.

Here's the application. The fee is only $35 for the Tuesday evening market, but the deadline is coming up soon. More info below, or see the full notice here.


“We are thrilled to expand the outdoor market’s operations to Tuesday afternoon and look forward to reviewing applications from local farmers and vendors,” said Brian Hanlon, Acting Director of the Department of General Services, the District agency that manages the market. “As a Capitol Hill resident, Eastern Market holds a special place in my heart and I am looking forward to enjoying fresh, local groceries from a new farmers’ market at one of my favorite historic establishments in the District.”

Eastern Market management is currently accepting new farmers for the weekday market only. Farmers must be third-party certified and be a regionally-based grower or farmer. The application can be found at www.easternmarket-dc.org. Successful applicants will be expected to sell every Tuesday under the outdoor farmers’ line shed beginning in June of this year.

You can also visit the home page of our website, www.easternmarket-dc.org, to download.  Applications need to be postmarked by May 1, 2012. A non-refundable application fee applies to each application.

Posted by Luke at 10:33 AM No comments: Links to this post

Labels: Around the City, policy specs, Public Interest, The District

The District isn't a city for block parties. Public streets are rarely closed for community events focused around food, drink, fun or local music. And when they are, it's most commonly for large annual events like the Beer Festival, Saint Patrick's Day or enormous foodie fests that are more like two day concerts with big-name headliners - quite a bit of fun, but not really a "community" event. At first I thought the remarkable absence of festivities was perhaps just my own biased perception, having come out of cities like San Francisco and San Jose where neighborhood parties are almost common phenomena by comparison. But DC has no lack of micro-community organizations, sometimes encompassing no more than three or four streets.

Neighborhood parties are a great way to get to know the people living around you, and the benefits of resulting social capital in areas of social stability, poverty alleviation, human security and disaster resiliency are pretty well documented at this point. But it turns out that getting a permit for a block party in Washington is at the "stupid difficult" level.

Read more »
Posted by Luke at 10:51 AM No comments: Links to this post 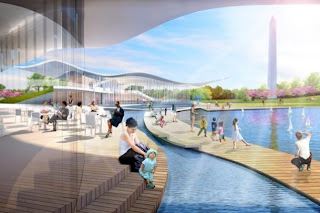 Since last September, architects and designers have been competing for the chance to make over areas near the Capitol, Washington Monument and Constitution Gardens, which was once imagined as a pastoral park near the Lincoln Memorial. Each of the areas under consideration were selected in order to enhance their utility as public spaces, and refurbish features that have decayed over years of use. Each of the designs would bring major changes, adding amenities including food options and restrooms.

While the proposals have been largely welcomed in feedback in social media, there have also been voices of concern that the new designs might undermine the district's historical features. But to be fair, the current theater is pretty lame compared to most of the new concepts. I mean, the new one would come with fireworks and thousands of engaged audience members > >
Some renovation would probably be good for the District's less than premium public spaces.

Check out the rest of the ideas at the Trust for the National Mall's REACT webpage.

Posted by Luke at 9:24 AM No comments: Links to this post