This GIS/social media relationship rocks my socks off. Researchers at Fast.co recently turned 8.5 million tweets into an interactive map of languages in NYC. As they explain:


You can walk the streets of New York City and hear a veritable babel of languages. It’s estimated that as many as 800 languages are spoken around the city. A new mapping project takes a look at which ones are the most spoken on social media.

Five percent of tweets were in languages other than English, with Spanish, Chinese, Russian, Korean, Italian, and French Creole topping the list. These are not the same top languages spoken by New Yorkers, respectively, which raises the interesting question of why not? Are some NYC language groups less inclined to use Twitter? Can the discrepancy be explained by exogenous factors like poverty or internet access? Or does everyone just tweet in English? 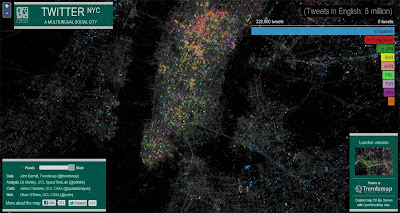 Posted by Luke at 1:36 PM No comments: Links to this post 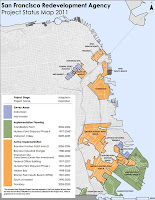 California Governor Jerry Brown began deliberations with the Legislature over dissolving the state’s 400 redevelopment agencies in the winter of 2011, and by June of that year they finalized the legislation. The abrupt demise of California’s massive multi-billion dollar local planning instrument has left many cities with administrative gaps in their economic development initiatives, and nearly $2 billion remain in limbo while local governments struggle to keep funds in their jurisdiction.

Sacramento contests that local redevelopment agencies were choking off much-needed revenue for state services with little benefit to the state at large, while local governments defended them as powerful tools for revitalizing urban centers and propagating ‘smart urbanism’. The move has pitted competing interests of public agencies against each other in a debate over who is best suited to take on their planning responsibilities.


What is a Redevelopment Project Area?


A redevelopment area is a special development district similar to enterprise zones, incremental tax finance districts, cultural districts and others, with several significant characteristics that set them apart. California redevelopment areas were designated by local municipal governments – typically a city or town, but sometimes counties as well – and they allowed the local government to capture a greater share of property taxes while reducing the private cost burden of new developments.

Read more »
Posted by Luke at 6:56 PM No comments: Links to this post