Cities develop an identity based, in part, on their expression of culture - and what is a more clear expression of this culture than crazy SF street art! San Francisco prides itself on an eclectic hodgepodge of identities - ethnicities, icons, sexualities, religions and mix of a dozen other factors - and the meeting of these forces manifests in anything from guerrilla art to coordinated public street projects. And these displays are not always where you would expect them.


Over the last ten months I've begun documenting some of my favorites in and around my city, and I'll be sharing a  sample over the next few weeks.

Take the murals of the Mission District that my program toured last Fall (around 24th and Folsom to Potrero) as the first example. They're neat, eh? And colorful? Indeed. But they are also woven into the history and identity of the neighborhood. We met with Erick Aronello of the Lower 24th Street Merchant & Neighbors Association and a handful of his colleagues, who explained the work and mission of his group within the greater context of the community. It is an unusual mix of neighborhood groups, local businesses and non-profit organizations (mostly arts, housing, job placement and family services) that sit on the board. It partners with organizations like LISC, the Market Planning Initiative, SF Planning Department, DPW and a dozen others on common services and special projects (such as creating and maintaining sanctioned murals). The Lower 24th MNA is only about 11 years old, but it formed at a critical moment and out of an immediate need within the community to resolve a history of residential and commercial conflicts that had stalled, and in some cases stopped altogether, the redevelopment and revitalization of this once flourishing neighborhood.

The recent history of the Lower Mission is an outstanding, though often tragic example of how the many variables of urban life play into each other in San Francisco. Once a predominantly Irish neighborhood with a  growing Latino population, the economic power of the Mission was in many ways upended during the construction of BART in the late 1960's to 1970s. They Bay Area Rapid Transit rail system had long been hailed as the next generation in regional transportation (replacing the Keys System of surface electric rail cars) and the project began with local and national fanfare. But when it came to urban planning, someone dropped the ball. In order for the underground rail lines to be laid, most of the Mission corridor was excavated and closed for several years without proper consulting or relocation of local businesses. There was inadequate public and pedestrian transportation along the route, and over time these businesses were forced to close. By the time BART construction was finished in the mid 1970s it was a different neighborhood, both demographically and financially. 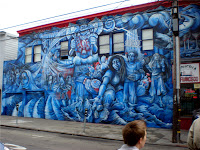 The neighborhood saw a surge in gang violence and the homeless population during the 1980s, and with this change came an inflow of drugs and organized crime. After a series of arson cases and violent murders in 1997-1998, the neighborhood began to seriously resist despite little cooperation from the City's police and local merchants. Residents lobbied the City for more public lighting and financial assistance, cut down trees at their own initiative to increase exposure from streetlights, and formed several ad hoc neighborhood watch and community programs. Many merchants were wary to get involved, concerned that they would lose the protections offered by local gangs. There were still tensions among the activists about the role that the SFPD could play in the neighborhood, and the community ultimately lacked enough resources to make these efforts lasting...

Seeing (and hearing) the evolution of this community movement, the City began to get its act together and worked with the neighborhood to assign a beat officer to the major streets. It may seem like a couple of officers is a sissy response to a serious problem (and it kind of was), but it was an important strategy. In a community with an often bitter relationship with the SFPD, a half-dozen cruisers patrolling the streets would be unwelcome and ineffective. But an individual officer on foot, engaging with residents and listening to their concerns, is suited to integrate into the community.

"People began to trust these guys after seeing them everyday," Erick explains. "They would start to get tips from store owners or other kids that knew them. And the beat officers didn't usually need to call in for backup. Sometimes they would just wander over to where drugs were changing hands or where 'the event' was going down, and they would just lean up against a wall and start talking with the kids until they were too uncomfortable and left!" He laughs.

But the beat officers did not last. Though the power of organized gangs had begun to slip and drug crimes sank, violent crimes were rising again. A new police chief had different ideas about combating gang activity, and alternated between the beat officers, and patrol cars and cameras as part of a police crackdown. After a series of particularly violent and public firefights between gangs in 2005-2006, the neighborhood groups also convinced the BoS to set up a "Safety Zone" gang injunction around 23rd Street, Ceasar Chavez and Guerrero. But of course it was not welcomed by everyone.

Opponents argued it was racial and discriminatory profiling (with some justification), and that the City was acting out against its minorities. Still, the rise of local organizations like the Lower 24th, the coordinated efforts of communities and merchants, and the SFPD gang injunction started to have a visible effect. As the neighborhood rallied in it successes, gang members began to move out of the Mission (but into others). 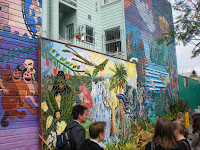 "The murals have been a real driver in the local economy and for the neighborhood identity," Erick explained to us, and they were a critical part of the revitalization effort. The murals began appearing in the 1980s during the revolutions across Latin America, as more and more families and refugees immigrated to the United States. These public cultural displays solidified (candidly) the identity of the Mission as a more Latino community. During the anti-gang efforts of the 1990's and 2000's, spontaneous murals were popping up across the Mission as social or emotional expressions of a community surrounded by conflict. But locals began to notice that unlike storefronts or blank walls, the murals were not being tagged with gang insignias or graffiti (very important territory identifiers). The City caught on, and in the early 2000's it started funding grants for murals on buildings and surfaces that would otherwise be tagged. It turns out that the murals are largely respected by neighbors and gangs alike, and are rarely tagged or desecrated - especially when they include images of the Virgin Mary. 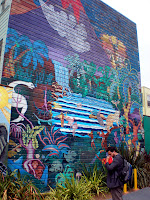 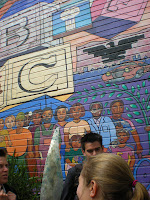 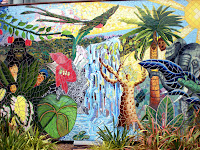 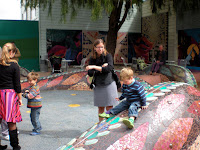 Erick and his colleagues agreed that creating an identity and a voice for the neighborhood and major corridors has been one of the most important achievements in this overall effort to revitalize the community by engaging and rallying residents. Today the neighborhood is more stable and vibrant. "Ma and pa" shops are still common, and iconic local taquerias still compete by moving in across the street from one another. The Lower 24th Street MNA is now working to make the corridor a more attractive and walkable destination (unlike the bike oriented Valencia St.) with showcased public art, filled storefronts, better lighting and new trees to replace all the ones they cut down.

They are not generally worried about gentrification as a threat to this identity. Property owners in the area are still mostly Latino immigrants, with a ratio of about 50-20-20-10, Latino, Asian, Middle Eastern and Caucasian respectively. Most of the middle class Caucasian "newbies" (sic) are renters with high turnover. But there is one recent group that Erick and the Lower 24th are keeping their eyes on. They are responsible for the rise of expensive coffee, the replacement of traditional bakeries with bad bicycle shops, the influx of energy drinks onto shelves where important groceries used to be, and the arrival of $3 yuppie cupcakes in La Victoria taqueria:

Labels: 9 Fellows Walk Into A Bar, Around the City, Urban Art