Made a snow angel
Today - it was a mistake.
Wet, hours later.

Read more »
Posted by Luke at 3:42 PM No comments: Links to this post The Washington Post published a graphic this morning that outlines the current proposals for long-term development of the DC Metro system. The $26 billion proposed plan to upgrade the Metro includes several key ideas to relieve crowding on the subway by 2040.

Of course nearer-term changes to the District's rail network are still in the works. Washingtonian's can get stoked as Summer approaches and the first phase of the Silver Line nears completion. Set to open mid-2013, Phase 1 will connect Reston, VA to the rest of civilization. (That would have been useful a few months ago when Chelsea was considering a job out there....). The last 11.5 miles of Phase 2 servicing the airport and Loudoun County is expected to wrap up in 2018, assuming that WMATA can reach an agreement for financing the rest of the project anytime in the next 3-4 years. The Silver Line is the largest expansion project by route mileage since the inception of the Washington Metro in 1976.

The District Department of Transportation (DDOT) is also finalizing plans to complete the H Street/Benning Road line of the long-anticipated streetcar network, expected to start revenue-service this summer. Of course, this project has been riddled with local infighting and other delays (including a lawsuit from the original Czech firm constructing the streetcars, which have sat rusting in a railyard in NE forst several years), and so a 2013 opening may be more a matter of cosmic luck than deliberate planning.

Consult in New Delhi, or "Three years from now..."

Below is a copy of the meeting minutes from this week's consultation in New Delhi, in which the Institute of Social Sciences and The Hunger Project hosted a roundtable of practitioners and academics committed to local governance issues and decentralization. See it here, and for more info check out our website at localdemocracy.net


MINUTES FROM THE INDIA CONSULTATION, 9 JANUARY 2013

India is a geographically and socially diverse country with a federal governance system. India has a tradition of decentralized governance since the implementation of the Panchayati Raj local government system in 1992, though these constitutional provisions often confront persistent structural challenges and limited mobilization of resources that impede effective participation, local planning and action. Against this background and with the support of the UN Democracy Fund, The Hunger Project (THP) organized an expert consultation in New Delhi on January 9 as the next step in cultivating a global community of practice on capacity building for participatory local democracy.

THP greatly appreciates the generous and enthusiastic participation by committed individuals from the UN system, academia and civil society who provided great support, information and recommendations to the project. We greatly appreciate the leadership of Dr. George Mathew (chair) and Dr. Ash Narayan Roy (executive director) and all the staff of the Institute of Social Sciences for organizing and hosting the consultation.

The experts identified numerous challenges, the most significant being the widespread shortage of resources among panchayat institutions and the civil society organizations supporting them. Only about 3-5% of total public funds in India are in the hands of local governments. Chronic shortages of funds and limited access to information about mandates and politics rights restricts their ability to mobilize resources to address local needs, even when there is local political will.

Read more »
Posted by Luke at 3:30 AM No comments: Links to this post

Quote of the Day

A man in a hat sat to my right, discretely.

It was knit and plum-red, and wrapped under his old chin. The room was cold even in the light of the rising sun that shone through the windows. He was at the corner where two of the long tables met, and he didn't speak except for occasional hums and soft grunts of recognition as others made their own points loudly. But when he finally spoke, it was deliberate.

"I look across the table and I see the same faces that I saw twenty years ago. I come to these meetings all this time with the hope of things changing, real change, when the people at the bottom finally get to stand up. And I think now, we are at a time when that is finally about to happen, in part because the people are so frustrated by the terrible things in Delhi that they may be ready for action."

He went on with the rest of the room silent, but his last words stuck with me.


Posted by Luke at 8:40 AM No comments: Links to this post

India Gate, or "When the cold sets in"

You could taste the juniper on your tongue, as well as the burning trash. While at once nostalgic of camping in the the lower Sierras, the smoke that filled the cold streets on Delhi in a thick haze was also pungent and choking. Three days ago this street was full of Indians protesting the failure of Delhi authorities to prosecute six men who had raped and killed a young women on a bus. The protesting had escalated to mobs and even conflict as police in military-style riot gear descended upon the crowd in an effort to clear them from the India Gate monument area. 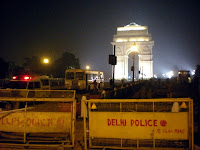 Today the park was empty except for the police buses and about 50 guards spread around the south entrance, and the smoke. This week marked the coldest day in New Delhi in nearly 44 years, at 1.9*C. Sam and I had left Washington in 1*C weather only a few days earlier as the Midwest was preparing for more snow, and so I understand when Americans ask why this is a big deal. But consider that for most of the year this region is nearly tropical, and that central heating is almost totally absent. More than 40 people died from exposure in Delhi yesterday.

As we drove around the city today from one meeting to another, I noticed scores of people wrapped in layers of shawls walking along congested (but somehow still flowing) roadways carrying stacks of freshly cut branches and children carrying sacks of leaves they had collected. Later on in the day these lines of travelers turned into groups of people standing around open fires in trashcans or even simply in the dirt near the street, in front of tall tents and gerry-rigged tarp and metal huts. Despite the government's large subsidies for kerosene during the colder winter months, many still can't afford to spend limited cooking fuel on heating an open space.

So now as we walked along India Gate, through the streets full of tuk-tuks and buses and cars that all rushed by in some chaotic yet purposeful swarm, the fog descended over Central Delhi and mixed with the smoke of juniper and trash and dung fires into a rich, bitter mist. The police brigades wrapped their faces in scarves, played cards and shared cigarettes, and smiled at us with shaking heads each time we approached the barricades. The protesters had moved closer to the parliament buildings these days, and except for the hum of the never-ending stream of autos the area was almost silent. And in a bustling city of 250,000 it was strange, and exciting.

Getting places, or "You almost had us there"

"I'm not going to do that for you. You have to go to San Francisco."

The woman stared back at me as she paused deliberately, adding to the finality of her response. She was young, only a few years older than me, and her eyes were an earthy green than complimented her skin. I thought it reminded me of a rich coffee. Under different circumstances I imagined she would have an inviting look, the kind that encourages nervous strangers to introduce themselves at a party. But not today. Not at all.

"Are you sure?" I asked. I knew what she would say, but what else could I do. Her face was expressionless. I had to have been the hundredth person to ask her this month. "C'mon, my friend was just here last week and he was done in like 10 minutes."

Read more »
Posted by Luke at 2:47 AM No comments: Links to this post