I wrote an entry this past March reflecting the political controversy around redevelopment agencies in . Governor Brown still argues that the State ought to dissolve the agencies to reclaim short-term costs to 's tax revenue, but others argue that redevelopment agencies foster long term growth and profits in areas that would otherwise not develop in the normal market.

There are examples of abuse and success for either side of the argument to hold up to the spotlight, but the San Francisco Redevelopment Agency is noted as one of the most successful cases in the program. The agency has integrated into the City's administrative framework since its incorporation in 1948 by taking on responsibilities in financing, planning and coordination in a variety of City projects, and even asserted its management capacity in increasingly complex initiatives. The SFRA now holds jurisdiction (often shared) over more than 10% of the . Active project areas include: 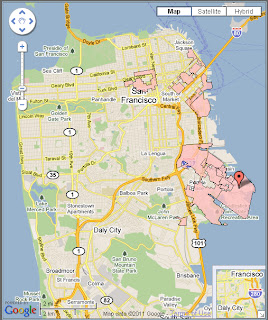 The Agency is an entity legally separate from CCSF, but it only performs certain functions authorized by the City and and in areas designated as Redevelopment Zones by the Board of Supervisors.
With the threat of dissolution looming awkwardly in the air over every redevelopment conversation in San Francisco, CCSF is left with the uncomfortable task of figuring what to do with the billions of dollars in projects, contracts and funds - and 10% of San Francisco - that will have to be handed to someone else to manage. Realistically, the RA projects already underway will likely continue without intervention or suspension, but the real problem is the coming disruption to administrative services and the juggle of authority that always gets more complicated than it needs to in SF. Now, there is also a whole bunch of money, land and social justice conflict involved to upset even the most idealistic department.
Posted by Luke at 8:05 AM