Realignment and the Corrections Crisis, or "9 Fellows Walk Into a Bar..." (Pt.5)

I visited Sacramento four months ago with my fellowship cohort to meet with policy wonks, and to ask some uncomfortable questions about the state of the State. A $26B budget deficit, gridlocked politicians, a frumpy economy, a mess of jurisdictional mishaps and dozens of uncoordinated populist initiatives that don't look so hot the next morning had (and still have) all conspired to ruin everything.  Wild rumors had been flying about in San Francisco that the state was considering a wide-reaching reorientation of public services, and that local governments would expectedly "get the shaft" in these changes. That turned out to be true.

It was hailed as the great "Realignment" and in this shifting of authorities, monies and services, prison reform (kinda) made it onto the list. And rightly, considering that California has one of the largest prison populations out of any state in the Union, and that the Union has the highest per capita incarceration rate in the ENTIRE WORLD. That mean's we're the best! 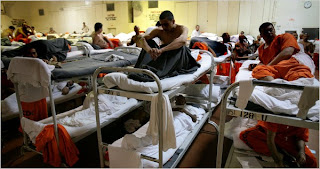 My group has started working with the County Sheriff's office on a project to evaluate the levels of recidivism in San Francisco, the effectiveness of corrections programming and alternative sanctions, and CCSF's ability to adapt some of those services to a new population. It could not be timelier. The US Supreme Court last month upheld an injunction against California's Department of Corrections and Rehabilitation for civil rights violations like inadequate medical care and services, and violence, due to overcrowding (see Brown v. Plata). The number of prisoners incarcerated in California since the 1970s has increased sevenfold, and the system is now over 175% of its official inmate capacity with 143,000 prisoners (down from 173,000 in 2006). This was identified as a significant cause of the rights violations, and so the State was ordered to either (a) increase capacity and services or - since California’s annual budget is still short by several billion dollars - (b) to release or redistribute approximately 33,000 prisoners.

The ruling itself was no surprise. The case was pending for several years, and it was really a matter of time before the High Court followed up in the case - it was just a bit earlier than anyone thought. Unfortunately this means San Francisco and hundreds of other municipalities across California will be absorbing some of the State prisoners into their jails and local corrections programs. The official objective is to move low-level offenders closer to their communities, as this has shown to encourage rehabilitation and stabilization - but it's also about money and a federal injunction.

This is a new demographic for county sheriffs - more serious crimes, different affiliations, somewhat more radical behaviors, and parolees. Counties are generally ill-equipped to manage these offenders, but we have to learn. The City's expecting at least 700-800 new state prisoners next year. It's hard to know a definite number, though; the state doesn't share all inmate records that signify who's eligible for the transfer.

As a state, we need to ask some important questions, foremost of which is how our already enormous corrections system has swelled to nearly twice its official capacity. Is it the judges, or lawyers, or the police? Whoever it is, they're clearly crazy. Unfortunately the problem isn't that simple. There does not seem to be any single mechanism to blame or switch to flip that would resolve this crisis - and with costs skyrocketing, a structural state deficit, abuses gaining public attention, report after report indicating that the prison systems are often overtly and procedurally racist, and with a new court injunction, it really is a crisis for the state.

But if I were to dismiss nuance and point to something as a fundamental structural flaw, I would start with California's infamous Three Strikes Law.

Passed in 1994 by the legislature and then locked in by voter initiative (really progressive democracy, again?) the Three Strikes law mandates an enhanced sentence for any third felony conviction. On the face of it this sounds reasonable, right? If a person is going to commit three separate felonies, then they lose the benefit of the doubt and deserve to be punished with an even harsher sentence. “They had their chance, now throw away the key,” the theory seems to go.

Secondly, California has this unusual tricky-bastard category of charges called "petty felony theft", in which the state charges crimes of theft, robbery and shoplifting of values under $400 as a felony if the offender has a record of any of these crimes. This creates the odd, but exemplary circumstances that led to Jerry Dewayne Williams' famous third strike pizza conviction. In 1995, Williams stole a piece of pizza from a group of kids. He already had two strikes for robbery and attempted robbery, so when he was charged with stealing a piece of pizza, Williams was sentenced to 25 years in state prison. His sentence was later reduced to 6 years after several technical appeals and some crafty work by his lawyers.

A new question then: If that's so absurd, why would the judge issue such outrageous sentences to Williams or other offenders like him? per the 1994 law, these tougher sentences are mandated. The judge may have some wiggle room in dismissing a previous strike or in adjusting certain terms of the sentence, but he or she generally loses judicial discretion in 3rd strike cases. (kind of defeats the point of judicial discretion). The law even eliminates “striker” eligibility for probation, and requires offenders to serve their time in prison instead of in a rehabilitation facility.

Plenty of challenges to this law have been made over the last 17 years - especially on allegations that the CA law violates Eighth Amendment protections of reasonable punishment proportional to the crime committed. So far these challenges have been overruled by State courts and the US Supreme Court has not taken an official position.

According to the California State Auditor’s May 2010 report,


“As of April 2009, 25 percent of the inmate population was incarcerated under the three strikes law.” (2009-107.2, p.1) … “We also estimate that $7.5 billion of the $19.2 billion in additional costs associated with striker inmates is attributed to strikers whose current convictions are for felonies that are not strikes [as defined under California penal code] .” (Id, p.21)

Some marginal improvements have been made to the Three Strikes initiative, such as allowing certain defendants convicted on non-violent drug possession to qualify for probation. But voter initiatives are incredibly difficult to overturn, even when they are not amendments to the state’s constitution. Elected legislators cannot simply alter or redact legislation that is the product of popular initiatives, but must either appeal to the courts or to the public through an open election. Californians have very rarely voted to weaken statutory criminal punishments, and the Three Strikes law still enjoys majority support

All things considered, the roots of this problem are much deeper and older than a 1994 initiative in California. Academic fields of sociology, psychology, criminology, social services best practices, and community resource planning have all evolved and matured over the past century, and yet it seems that overall our penal corrections have not. I am happy to defend San Francisco here - the Sheriff's Office diverts a majority of offenders into rehabilitation programming and alternative sanctions so that they are not housed for long periods in county jails with little to do but adapt to inmate etiquette (more to come on this as our work continues...). But they are a staggering exception. Costs of detention have risen to nearly $49,000 a year per inmate, and the Supreme Court’s recent ruling on overcrowding is a rude awakening to State policymakers. California now faces the reality that its corrections system is simply unsustainable. It’s time for us to tackle prison overcrowding with an earnest effort, and to revive a serious public debate about the structure and intent of our corrections system.
I don't pretend to offer a catch all solution to the prison crisis here in California, or even a resolute position on modern American political culture (in this post anyway... I offer plenty of positions already). But I do hope that some of you will start to think about these issues as San Francisco, the state and the country begin to face off about prison reform. It is a serious fiscal concern, a snowballing social dilemma, and a telling manifestation of the social contract we hold with our government as the enforcer of our laws. Think about it next time some one suggests "throwing away the key". It hasn't worked so far.


A friend recently gave me an intriguing article on this conflict, and if you are interested in the subject, I suggest it as starting point (as with any source, take it with a grain of salt).


"All aspects of punishment have been industrialized in more recent history, and only punishment has been industrialized. The idea of “correction” is out the window. All that’s left is punishment. What’s different between 1949 and 1989 is that by 1989 in California prisons, the buildings were designed to make punishment efficient as possible. That’s it. That’s what it says in the law starting in 1977, effective in 1978. "