District Bikeways, or "The obstacle course"

It looks like DC is finally looking to make moves on District bikeways just in time for the transit bill to take away local control of bike-ped funds. Yay timing! 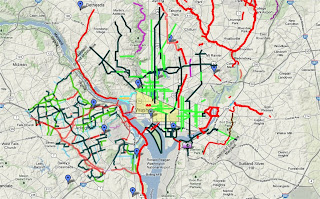 Let me drop you some knowledge about biking in DC. It's not great. The District has received a lot of attention recently for its increasingly bike-friendly policies coming down the proverbial pipes, but the experience includes plenty of indirect routs, unprotected bike lanes, disjointed bikeways and drivers that are largely uneducated on right-of-ways and, on average, very bad at driving.


Consider my ride to school - Capital Hill to Foggy Bottom. There are plenty of bike routes around our home in Capital Hill, but they don't connect to any of the routes heading westward. Generally street activity is mild enough in the middle of the day so that this isn't a problem, but during commute hour it gets a bit dodgy. There are basically three routes to get to GWU from Union Station: (A) through downtown along the E Street corridor, (B) ride up Penn Ave from the Capital building, and (C) along the National Mall.

The E Street corridor is the shortest distance, strictly speaking, and it has a separated bike lanes for both directions from Union Station to (almost) the White House. At 2:00AM on a weeknight it takes me about 11 minutes to get from my school library to my house. During the day, on the other hand, it can take about 20 minutes in traffic and up to 30 minutes during commute hours, mostly because so much time is spent at red lights and avoiding cars driving into or sitting in the bike lanes. Fortunately cars are moving slow enough that injuries seem to be limited to scrapes and bruises and minor car damage. Where the bike lanes end, about a block from President's Park, is on the wrong side of traffic on 15th NW and is frequently obstructed by special events or police. Just crossing that street can take 5-10 minutes on a bad day. E Street doesn't save much time, and there's a lot of stress in riding it.

Pennsylvania Avenue is the next clear option. Two-way dedicated bike lanes from 3rd NW to 14th NW and it's almost flat. It's not a bad ride overall, but the traffic lights are not really synchronized outside of evening commute hours so riders have to stop and start almost every block. And again, the lanes end on the wrong side of President's Park. Average commute time is about 25 minutes.

So option (C), the Mall. During the tourist off-season and after commute hours this is perfect - 1.5 miles of straight and nearly flat road with only four 4-way intersections. On good days it's a 16 minute ride door to door. But it might also be the most risky. During the day there are angsty commuters, buses, tourists in cars and on foot at every museum, and lots of kids. Madison Drive and Jefferson Drive are clearly labeled shared-road bikeways, but I have seen at least a dozen spills and maybe two or three dozen "close calls" as bikers swerve to miss unaware pedestrians or get swiped by frustrated drivers trying to pass them.

Which brings me to my point: attracting bicycle commuters is a matter of convenience for most riders. Are there efficient routes to my destination? Are there bike racks or designated lanes or other infrastructure? Is it safe? Ultimately, is it more convenient for me to ride my bike to work/school/grocery store, to pay for the metro or a bus or a cab, or to just drive?

From the planners' perspectives, is it economical to install more bicycle infrastructure? What are the benefits? Will increasing bike commuting reduce congestion by removing cars from District streets at peaks hours, or will it just reduce ridership on public transit? And to what degree will it benefit community interests?

Bike infrastructure is incredibly cheap per-capita, and it can be maintained on regular roadway schedules. According to most of the literature on urban bikeways, demand and ridership actually responds to and rises with greater availability. More consistent, connected and quality infrastructure would attract more local cross-town commuters, and likely reduce peak hour congestion through the city center and on metro lines. But it could also attract workers not commuting to downtown commercial areas. Residents in Columbia Heights working in Dupont, or commuters from Georgetown neighborhood or outer Capital Hill where metro doesn't reach would have viable alternative to bus routes and taxis.

The local economic benefits that come with increased bike ridership could very well tie into the District's walkable neighborhood initiatives, support the outgrowth of surface rail in NE, and help to achieve Mayor Gray's healthy city goals.
Posted by Luke at 8:03 AM