What a US default would mean, and why you really need to care

*I'm going to preface this with a request. If anyone reading this can provide me with a good explanation of the GOP perspective, I will be incredibly grateful.* 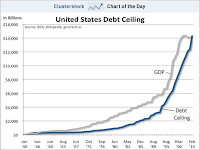 The general media has thrown around words like “apocalypse” and “destitution” and “bluff” in the face of federal default, while a minority of the GOP has seriously suggested that it could even be a good thing for the nation – an opportunity to sober up government and reduce unbalanced spending.
That sounds nice, but absolutely absurd. I don’t mean to be partisan most of the time, but with an honest look at our prospects in the wake of 4 failed negotiations this week, there isn't really an alternative. Yes the government spends A LOT of money, and Yes it needs reforms to reach sustainable limits, but the debt ceiling is now too serious a trigger to be used as a bargaining chip in budget negotiations.
If the federal government fails to pay its dues and the bond rating is reduced from AAA to B-plus, you can bet your ass we’ll have a fiscal crisis on our hands, as well as a tremendous shockwave throughout the entire national economy that would almost certainly cripple any recovery that we’ve managed to eek out so far.
Clearly the GOP/Tea Party Caucus has never taken a course in macroeconomics (which from me is saying something!) You see, it’s not just about a decreased bond rating from Moody’s – most people don’t even know what that means. Those that do increasingly counter that these large rating agencies gave companies like Leman Brothers high marks before their inevitable collapse, and so why should anyone trust their ratings now?


1) Touché. 2) That’s still ridiculous. Whether it’s a witty point or not, lenders still use these ratings as primary indicators when purchasing government bonds. If “the market” and all of it’s intricate mechanisms/ actors lose confidence in the federal government’s ability to back its own bonds, then the risk begins to outweigh the benefits of purchasing them. In order to make bonds attractive again, the federal government would have to increase interest rates so that buyers get a higher return for their investment; more money back so that it becomes worth the risk. In the long term, that means WAY more debt, but also far less public spending. 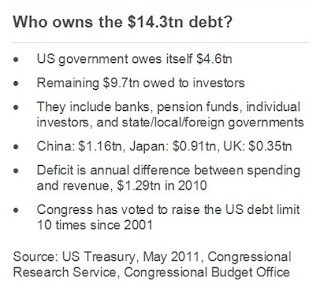 More important than market perceptions is the fact that many corporate buyers and other government entities that buying these bonds (domestic and foreign) have pretty strict statutory requirements that they only purchase AAA-rated bonds. A B-plus rating means that the federal government would be disqualified from many of these purchases.
Simply, they will not be allowed to purchase US bonds, or give our government loans.
This is very important. The government will have a harder time borrowing, and when it does borrow, the premiums will cost a lot more money.
PUBLIC SPENDING
You may be thinking, “Well hey, I want the government to borrow less since it’s already FOURTEEN TRILLION DOLLARS IN DEBT. This sounds like the perfect way to force its hand!” Nice sentiment, but again, it’s ridiculous. (sorry).
Regardless of political ideology, the national economy is still VERY MUCH dependent on public spending. Since the 2008 meltdown (which I just realized is actually a very accurate metaphor), private spending has significantly dried up – and understandably. Once individuals began to recognize their financial liabilities, they redirected their incomes from expenditures to savings to reduce their own financial risks.
Individually, this change in behavior is rational; keep more cash on hand in case things go south again. But when everyone does it at the same time, things get complicated. The aggregate effect is that very little money is changing hands and the economy’s engine basically runs out of gas. As people spend less, companies scale back their operations and lay people off, and then people try to conserve more and spend less, and then companies scale back again…. You see where this goes.
This is where an active government steps in. In order to avoid cascading economic depression, the government begins to spend its own money – public money – in order to keep up economic activity. Capitol projects, grants, subsidies, and selective tax breaks all pump resources into the economy and increase demand for private businesses to supply goods and services. Ideally, this keeps the economy running until private consumers are confident in spending again.
We’re not there yet (which is pretty frustrating). If the defaults on its obligations and expenses skyrocket while public spending plummets, the economy would likely collapse into another depression.

CONSEQUENCES
This is all a bit abstract, so let’s consider some real-world consequences that individuals (or "consumers", if you prefer) would feel in the following months.

(A) A default would immediately compromise industries backed by the federal government, especially banks. Borrowing will become more expensive and lending/investments (private and commercial) will stall. Companies and individuals will do less with their money, and the national economy will stagnate.
(B) Inflation. OMG inflation. As it becomes clear that the WILL default on it’s payments, investors who “own stocks” in the US dollar (which is still a funny concept to me...) will sell off the currency in a frenzy for more stable ones. The go-to is usually the Euro, but considering the financial troubles of and several other countries this is less likely. More likely investors will shift to gold and silver – as we can see by the recent, rapid jump in gold stocks – or more stable currencies like the Swiss franc or something otherwise uninteresting. Regardless the value of the US dollar would very quickly bottom out, and imported goods would suddenly become very expensive (more $ for the same stuff). You think gasoline costs a lot now?
(C) The most ironic piece of this is that WE’LL HAVE TO RAISE TAXES ANYWAY on top of even deeper spending cuts! It will simply be impossible to balance a budget with just spending cuts when revenue tanks and even more Americans depend on public services to stay afloat. (think again)
(D) The will easily lose its global status as an economic leader and drop behind stars like and the EU (yeah, despite its own issues). This could be temporary, though, as ’s economy might also implode when we stop buying their things.

Simply, THIS IS NOT AN ISSUE THAT YOU PLAY AROUND WITH! Unabated, this juvenile temper tantrum will end in ruin for the Tea Party (as recent numbers clearly show) and take the economy to the chopping block.
Disregarding partisan views of President Obama on other issues, his administration offered the Boehner and the GOP the opportunity of a century this past week. They compromised on Medicaid/Medicare and tax increases, offered deep cuts, and asked only for reductions in some tax exemptions (just as Ronald Reagan did in his first two years, mind you) to raise revenues – a perfect political out for Republicans who promised not to raise new taxes! In doing so Obama now finds himself to the RIGHT of most Americans, pretty much all Democrats, and even some Republicans (what is the world coming too?!) . But instead of taking the deal, Speaker Boehner and his colleagues rejected the most radical reduction in the federal spending in nearly 20 years so that they could call the Presidents “bluff” and squeeze out some additional cuts.
I’m not sure how anyone can negotiate with that. But let’s hope that someone with an ounce of adult sobriety steps out of the GOP's Tea Party craze soon, to restore the slightest level of sanity to this discussion.