District Parks Divided, or "Occupy protesters vs. land use planning" 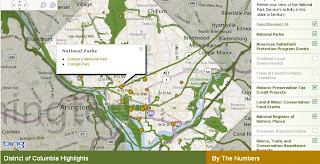 Is your local park locally or federally owned? I'm willing to bet that most of you have never really considered this question. For most people around the country there is no reason to (except for in places like the Presidio in SF, which is still a national park with apartments and storefronts in it). But jurisdiction over DC's parks is split between the federal government - specifically the National Park Service who manages them and the Architect of the Capital that plans and designs them - and DC local government. This has two important implications. The first is an issue of finance; since Washington government does not own the land or the structures on the property, it does not see any revenue generated from vendors/tourism and it cannot leverage them as collateral assets in financial planning (i.e. bonds, loans, credit ratings, etc). It might sound crazy to leverage a park or recreation area on a public loan, but it's actually pretty common and most local governments have many other tools for managing repayment issues so that they don't actually give up the property in a pinch.

But the second is a bit more interesting from a public interest perspective. This disparity was recently exemplified during the Occupy DC protest when - after several months of sit/lie ins in McPherson Square and other parks - District residents overwhelmingly supported the removal of long-term encampments. Despite Washington's overwhelmingly left-leaning political culture and recognition that Occupy had made its point, residents wanted use of their parks back. But there was one simple problem: DC government did not have jurisdiction over the parks.

DC Park and Rec controls about 900 acres of parks and 68 recreation facilities including 25 outdoor pools, 8 spray parks, and 10 indoor pools all offered with no admission fee for residents of the District. But more than half of the public open space in Washington is under the federal government with no immediate accountability to local residents (we have no formal voting representation, and Republicans in the House have recently disregarded unofficial but traditional protocol for allowing our one representative to speak at hearings). This means that planning, programming, maintenance, redevelopment and general management is simply out of the control of local neighborhoods that use and rely on them.

The National Park Service retains control of many of the public spaces in Washington as a legacy of federal control prior to the Home Rule Act. This includes spaces like the National Mall, the monuments, Rock Creek Park, and the grounds of federal buildings. But NPS also controls dozens of smaller parks and other public spaces around the city. As Washingtonians pressed for the removal of encampments in McPherson Square, the federal government pushed back. There were several representatives and big-name activists that encouraged NPS to continue allowing protesters to occupy the park (since the image of the Occupy movements had clearly become a national political issue), but more importantly locals faced a slow moving and seemingly unresponsive bureaucracy that appeared to have difficulty reacting to eviction conflicts.

For much of the past decade this separation of jurisdiction was a recurring but manageable issue for local development. After a series of scandals in the late 1990s, in which it was revealed that several administrators were misusing federal and local funds through nepotism and general mismanagement (a recurring problem since the Home Rule Act), the Department of Parks and Recreation (DPR) underwent a series of internal reforms and SOP changes under a new director - such as submitting construction contracts to the DC Financial Control Board instead of the dysfunctional Office of Property Management. DPR's programming saw rapid improvements over the next several years, and by 2003 it was the second-largest provider of subsidized meals to impoverished children in the District (only behind the DC public school system). Programming improved through 2007, but the department became mired in political controversy with the appointment of new leadership under questionable circumstances. This conflict continued in various forms through 2009 as the department was criticized for being unresponsive to local needs and as Washington government tried to manage persistent revenue shortfalls in the midst of the recession.

Like many Parks and Rec departments across the US, DC-DPR was forced to make cost-saving reforms over the past few years as public budgets shrank. Though more responsive to neighborhood activism, DPR has of course been criticized for less-than-adequate maintenance of the city's parks. In 2011 alone the department laid off nearly two dozen full-time staff to reallocate more than $1million for program spending.

The proposed 2012 budget is more rewarding. DPR has come under deserved criticism in the past for focusing on recreation centers at the expense of its parks, and in some cases even building rec centers OVER parks as a way to deliver programs and services to an increasingly dense population. Both rec centers and open parks are very important, and in this budget the DC government seems to be making some amends. The Department's budget includes allocated funding for 4 new full-time employees and $750,000 in capital to work on park policy and programs, and an additional $500,000 to plan and develop a new public space and playground area downtown (which has recently seen a boom in residential units and a demand for open green space). DPR will also get about $300,000 to work with the Office of Planning to plan a renovation of Frankline Square. However, since NPS also controls this space and Architect of the Capital is typically responsible for design and planning for theses areas, DPR will have to seek jurisdiction before implementing any new changes. (get more info at Greater Greater Washington.) The problem now is that DC development aspirations are butting up against the national craze at the federal level to CUT ALL THE SPENDING. The local government and CBOs are reconsidering earlier land use designations, but new ambitious projects must rely on the cooperation of a federal agency facing the constant threat of budgetary setbacks.

If you're interested in urban parks and green-space in general, I'd highly suggest the City Parks Alliance website for starters.

Additional shout out to SF and Sacramento city parks in The Atlantic Cities this week :D