Home designs for humanitarian crises, or "What do IDPs and hipsters have in common?" 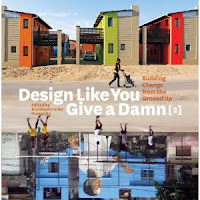 A friend at school asked for a book suggestion last December as part of her effort to find the perfect Christmas present for her architecture and development inclined SO. By chance, I actually had a book on hand for exactly this situation! Architecture for Humanity collected information on dozens of innovative, low-cost, "sustainable" designs for habitable structures back in 2006 and featured them in a handbook called Design Like You Give a Damn.

Someone had bought it, presumably used it, and discarded it at the end of my freshman year of college at Santa Clara. After haggling with the book-nazi in the basement of our student center (not the nice gray-haired woman, the other old guy that didn't smile) to sell back my calculus text for more than $10 - and failing - I found this gem on the FREE table. It was brilliant. I read the book cover to cover and shared it with a few people, and I wound up working on our school's Solar Decathlon team the next year because I thought the whole idea was so nifty. After suggesting the book I read through it again, and I've been following their work for the past few months.

* (As a side note, I was wary to share the project link for a moment because of a hilarious photo of me in an electric cart on the website - which was eventually featured on a popular Tumblr thread and Reddit under "white and nerdy" some years later, not of my own doing. But that was actually pretty funny, so nm.)

Architecture for Humanity produced a second version of the book, Design Like You Give a Damn [2] that includes new projects and updated information. For those of you into urban design or international development or just cheap living habitats, you should rent it form your library or just buy a copy. It's worth it. Several of the projects apparently provided inspiration for some of this past year's Solar Decathlon entries, so HEY FULL CIRCLE EXPERIENCE.

This green living design stuff isn't limited to poorer countries or university competitions though. New ideas for cheap and green living keep popping up around the US, mostly around creative re-use of unexpected materials. A website called Jetson Green wrote a piece on the 15 coolest shipping container projects of 2010, and it's also worth a look.